Amon-Ra St. Brown of the Detroit Lions has been cleared of the NFL’s concussion protocol and will play against the Miami Dolphins on Sunday. 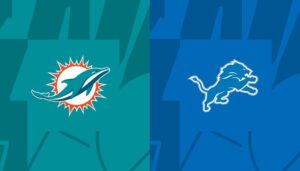 The Dolphins and Lions face off at 1 p.m. ET on Sunday at Ford Field in Detroit.

According to NFL Network’s Ian Rapoport, Detroit Lions wide receiver Amon-Ra St. Brown has been cleared to play in Sunday’s game against the Miami Dolphins. St. Brown was in the NFL concussion protocol during the Lions’ Week 7 game against the Dallas Cowboys, but he did not sustain a concussion.

St. Brown’s clearance allows him to return to the field on Sunday, which happens to be a game against the Dolphins. The receiver has 28 receptions for 275 yards and three touchdowns in five games this season. As a rookie last year, he caught 90 passes for 912 yards and five touchdowns.

Cracraft is the only Dolphins player ruled out of the game, with the rest of the injury report remaining unchanged.

Tight end Tanner Conner has a knee injury; safety Clayton Fejedelem has a groin injury; cornerback Xavien Howard has injuries to both groin muscles; punter Thomas Morstead has an illness; tight end Durham Smythe has a hamstring issue; and defensive end Emmanuel Ogbah has a back injury.