On Wednesday at 10:00 PM ET, the Denver Nuggets will host the Minnesota Timberwolves in a Northwest Division matchup at Ball Arena in Denver, Colorado. 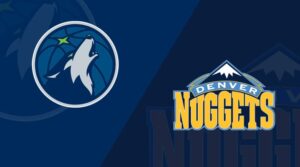 At the moment, Nikola Jokic is in charge for the Nuggets, and he is reported to be fit to play against the Timberwolves.

The Nuggets star has been a revelation over the past few seasons, so there isn’t much more to say about him at this point. He has been sidelined for a while due to pain in his wrist, which forced him to miss a game last week. Still, Jokic rarely misses games due to injuries, so he shouldn’t be out for long if he keeps playing despite discomfort.

With left hip soreness, Anthony Edwards’ status for Wednesday’s game in Denver is in doubt.