The Lakers will travel to Denver to take on the Nuggets at Ball Arena. This will be the final game of the four-game series and the Lakers lead 2-1. 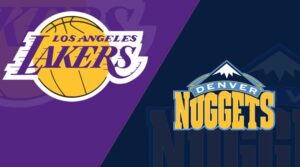 The Los Angeles Lakers have won five straight games, including four straights since the start of the new year. Furthermore, the Lakers have a 2-1 series lead over the Nuggets, including back-to-back victories. They come into this game hoping to finish the series 3-1 and win their sixth game in a row.

Anthony Davis is set to take a big step forward in his recovery from a stress injury to his right foot by going out on the court for an individual workout in the coming days.

Davis has missed the Lakers’ last 11 games due to a foot injury, and he’s likely to miss at least a few more games even if he performs well in his upcoming workout.

Davis is reportedly progressing well with minimal pain in his foot, but he’ll need to perform well in the workout before being cleared for contact work and eventually allowed to join teammates in practice.

In the absence of Davis, Thomas Bryant will continue to hold down the fort at center. Davis could return to the lineup in the latter half of January.

Due to left ankle soreness, LeBron James has been listed as probable for this game. It’s not surprising to see James on the injury report, as he has been in almost every game this season. He’s been on fire recently, averaging 34.3 points, 7.6 assists, and 7.3 rebounds per game in his last ten games.