The Toronto Raptors will play the Los Angeles Lakers on December 8, 2022, at 12:30 a.m. UTC. The match will be held at Scotiabank Arena. 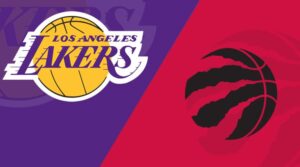 The Lakers have won three straight games with a new lineup and are back on track.

For the past four games, Anthony Davis has been dealing with low back tightness, but he has played through it.

Davis scored 55 points on Sunday, shooting 73.3 percent from the field and going 9-for-9 from the foul line. He has been a driving force in the Los Angeles Lakers’ success and has reestablished himself as one of the league’s best players.

LeBron James (ankle) is expected to play against the Raptors on Wednesday.

Despite continuing to suffer from ankle pain, James has played in six straight games. James has averaged 28.2 points, 8.2 rebounds, 6.0 assists, and 1.3 steals in his first six games back from his initial adductor injury.

Meanwhile, Wenyen Gabriel is questionable for Wednesday’s game against the Raptors due to left shoulder soreness. If Gabriel is forced to sit out, his next game will be in Toronto on Wednesday.

In terms of Raptors injuries, TSN.ca’s Josh Lewenberg reports that Juancho Hernangomez (ankle) will miss Wednesday’s game against the Lakers.

Hernangomez has been officially demoted to inactive status after being deemed doubtful initially. He has recently been a regular in the Raptors’ rotation, but his minutes could be reduced if Otto Porter (toe) returns.