This Saturday in Charlotte, North Carolina, the Milwaukee Bucks (15-5) will face the Charlotte Hornets (6-15). Inside the Spectrum Center, the game begins at 6:00 p.m. EST. 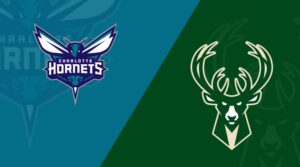 The Charlotte Hornets were defeated by the Boston Celtics 140-105. They struggled defensively, allowing Boston to shoot 59.1% from the field. They will need to get more stops in this game if they are to defend their home court against the Bucks.

The Charlotte Hornets currently sit in 13th place in the Eastern Conference, 11.5 games behind the first-place Boston Celtics.

LaMelo Ball (ankle) will not play against the Bucks on Saturday.

Dennis Smith (ankle) will be out against the Bucks on Saturday.

Smith will miss his third straight game due to a sprained left ankle on Friday. Terry Rozier and Theo Maledon will likely see more playing time now that LaMelo Ball (ankle) is out.

The Milwaukee Bucks defeated the New York Knicks 109-103 last night. They looked great on defense, and if they want to challenge the Hornets on the road, they will need to keep applying pressure.

The Milwaukee Bucks currently sit in second place in the Eastern Conference, two games behind the Boston Celtics.

For this game, Khris Middleton SF (Wrist) is listed as probable.