The Bucks will begin a four-game road trip in New York on Monday night. The Bucks are looking to avenge a 138-109 loss to the Hornets, while the Knicks have won four straight games. 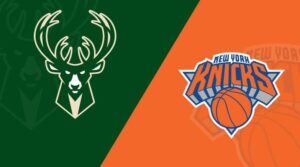 The Bucks started the season 19-6 but have struggled with consistency since then. They lost four consecutive games during the Christmas week before winning three of their next four. They defeated Washington 123-113 on Tuesday before defeating Toronto in overtime on Wednesday. Milwaukee was unable to extend its winning streak on Friday, falling to Charlotte in a 138-109 defeat.

Injury reports: Both Khris Middleton (Knee) and Serge Ibaka (Personal) are out for this game.

Giannis Antetokounmpo is prepared for this match.

The two-time MVP will play despite left knee soreness, as expected. Antetokounmpo has averaged 39.1 points, 14.9 rebounds, 5.5 assists, and 1.7 combined steals-plus-blocks in 37.8 minutes over his last eight appearances.

The New York Knicks has been dealing with inconsistency as well, but it has been a much streakier team than Milwaukee. The Knicks rattled off eight straight wins following their 10-13 start to the campaign, but they proceeded to lose their next five games to fall back to .500 overall.

They have bounced back with a four-game winning streak, beating Houston, Phoenix, San Antonio and Toronto. The Knicks were favored in the first three wins, but they were 4-point underdogs in their win over the Raptors.

Injury reports: R.J. Barrett (finger) is listed as questionable for this game.

Though Barrett appears to be getting closer to returning from a laceration on his right index finger after participating in most of Sunday’s practice, the 22-year-old wing is still on track to miss his sixth consecutive game on Monday. Barrett’s continued absence should allow Immanuel Quickley and Quentin Grimes to see more playing time and usage.