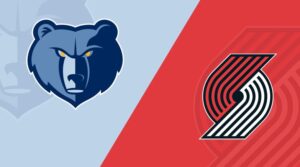 Memphis took on the Lakers in the second game of a four-game road trip. The Grizzlies stayed in the game, and Ja Morant had a chance to force overtime, but he missed the game-tying free throw. Morant finished the 121-118 loss with 40 points, three rebounds, ten assists, and three steals.

The Memphis Grizzlies have only one player listed as injured for their game against the Portland Trail Blazers. Dillon Brooks is still recovering from a broken left hand he sustained during the offseason.

Brooks will be re-evaluated this week or next week to determine when he will be able to return to the Grizzlies. He hurt himself trying to reach for the ball during offseason practice. He overextended his hand, breaking it in two places.

While Brooks recovers from his injury, De’Anthony Melton is filling in. Melton has performed admirably as the Memphis Grizzlies’ interim starter. This season, he is averaging 18.3 points, 4.7 rebounds, 2.7 assists, and 1.0 steals per game.

Ja Morant is expected to make his in the starting lineup. He would pose a serious threat to the Blazer.

Morant scored 37 points on 12-of-18 shooting on Monday, bringing his season total to 33.3 points per game. He surpassed 30 points for the fourth time in six games.

The Clippers defeated Portland 116-86 in their most recent game. The Blazers struggled early in the first quarter, and it got worse in the third. The team had 30 turnovers for the game, while Damian Lillard continued to struggle with only 12 points and missed all eight of his deep shots.

The Portland Trail Blazers will face the Memphis Grizzlies on Wednesday with two players out due to injuries. Starting for them are small forward Norman Powell and versatile swingman Tony Snell.

Powell suffered a knee injury in last Saturday’s win over the Phoenix Suns. He missed the Los Angeles Clippers game but escaped with minor injuries. Tendinopathy is the medical term for his injury. Rest is the treatment for a medical condition in which the tendons are overused.

Powell is listed as questionable against the Grizzlies, while Snell is out with a right foot sprain that has kept him out since the preseason began. Snell has not appeared in a Blazers game since signing as a free agent in the offseason.