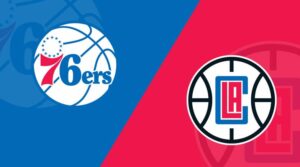 Paul George, a star for the Los Angeles Clippers, is questionable to play Tuesday night against the Philadelphia 76ers after missing the previous five games due to an injury.

The Clippers are struggling to stay above.500 on the season, so repairing George’s hamstring injury is a top priority.

George was upgraded to questionable status after a successful Monday morning of practice, indicating that he suffered no setbacks. Ty Lue said that George was taking part in every aspect of the team’s preparations, but he didn’t know how many practices George would need to be fully healthy to play in a game.

Injuries to his right calf have forced Kennard to sit out for five consecutive games. On Wednesday in Utah, he will have another chance to make a comeback.

The Philadelphia 76ers are healthy and can field their best team, that’s exactly what they’ll do tonight.