The Miami Heat take on the Phoenix Suns in a cross-conference matchup at Footprint Center in Phoenix, Arizona on Friday. 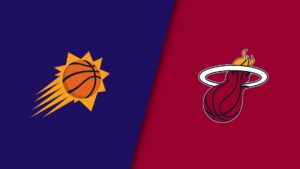 The Miami Heat  were defeated by the Los Angeles Lakers  on Wednesday.

The Heat lost in dramatic fashion after beating the Utah Jazz 126-123 and the Los Angeles Clippers 110-100.

With eight minutes left in the fourth quarter, Miami led by six points but couldn’t hold on.

Miami outscored the Lakers 66-60 in the paint and grabbed 14 offensive rebounds. The Heat had a good assist-to-turnover ratio of 24/13 and shot 45.3% from the field, but it wasn’t enough.

Miami will travel to Arizona without Duncan Robinson (finger), Nikola Jovic (back), and Omer Yurtseven (ankle).

Payne (foot) will not play against the Heat on Friday, according to Duane Rankin of The Arizona Republic.

Payne missed nine games in December due to a foot injury, which he aggravated in Wednesday’s game.

He’ll join Devin Booker (groin) on the bench on Friday, giving Duane Washington and Landry Shamet more playing time. Payne’s next opportunity to play will be against Cleveland on Sunday.

The Phoenix Suns extended their losing streak to four games on Wednesday.

They were defeated 90-88 by the Cleveland Cavaliers to cap a six-game road trip. In a defensive battle, the Suns blew an 11-point lead by hitting only 39.5% of their shots.

Phoenix shot 10-for-28 from three-point range and had a 24/15 assist-to-turnover ratio, but the Suns allowed 55 points in the second half after holding the Cavs to 33 in the first.

Devin Booker (groin) and Cameron Johnson (knee) are out, and Cameron Payne (foot) is questionable.