The Milwaukee Bucks (7-0) will look to build on a seven-game winning streak when visiting the Minnesota Timberwolves (4-4) on Friday, November 4, 2022 at Target Center. It airs at 7:00 PM ET on ESPN, BSN, and BSWI. 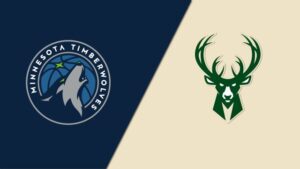 When the Milwaukee Bucks visit the Minnesota Timberwolves on Friday, they will look to make franchise history. With a win over Minnesota, the Bucks can match their franchise-best start of 7-0, which they did on Wednesday with a 116-91 rout of the Detroit Pistons.

The Bucks have been outstanding on all fronts, as evidenced by their seven-game winning streak. Giannis Antetokounmpo has been at his best, averaging 33.5 points per game and shooting 56% from the field.

The Bucks have played well and come into the game with no losses. They have a good scoring record, which helps them. They are 6-1 ATS in their last 7 games when their opponent scored 100 points or more the night before. They’ve also gone 9-3 ATS in their last 12 road games.

The Bucks are missing Khris Middleton (left wrist surgery) and Pat Connaughton due to injuries (calf).

Khris Middleton will miss the Detroit Pistons’ game against the Milwaukee Bucks on Wednesday. Khris Middleton, an All-Star shooting guard who has missed the first six games of the season.

Middleton practiced with the Wisconsin Herd (G League) on Tuesday, according to Nehm, which is a good sign that he could return soon.

The Timberwolves are coming off two straight losses when they face the Bucks. They have struggled against the spread in their last ten games and are 1-4 ATS in their last five games played on two days rest. They are likely to struggle again in this game.

Minnesota entered the season with high expectations after acquiring Utah Jazz center Rudy Gobert, but the team’s starting lineup has struggled to find its groove.

Gobert is questionable for Friday’s game against the Bucks due to an illness.