On the final injury report for the Cardinals’ game against the Saints, eight players are listed as questionable and ten are ruled out. 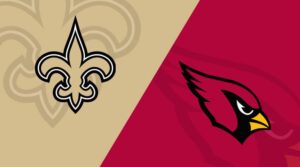