D’Andre Swift and James Conner have been out with nagging injury for the past few weeks, and Cam Akers hasn’t played since Week 5 after falling out with Rams management.

The statuses of these fantasy-relevant runners will play a significant role in Week 8 fantasy RB rankings and start/sit decisions, so it’s critical to have the most up-to-date information before making roster moves. We’ll give you the most recent information on these running backs and explain how their injuries may impact the Week 8 fantasy landscape. 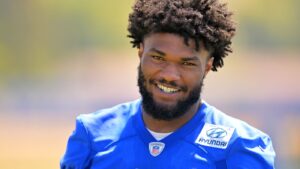 Update: Akers (personal) is unlikely to play against the 49ers in Week 8.

After a falling out with management, Los Angeles is still trying to move Akers before the trade deadline.

Given the possibility of a trade, it’s still worth holding on to Akers, as a new destination could lead to more opportunities.

Detroit is clearly being cautious with their star running back, but assuming the second-year back practices every day this week (potentially as a full participant), his Week 8 prospects look promising.

Swift faces a difficult matchup against a solid Dolphins run defense if he returns, but his ability to assist in the passing game raises his floor in PPR formats. If he misses his fourth game in a row, expect the Lions to rely on Jamaal Williams, Craig Reynolds, and Justin Jackson in the running game, with Williams being the only fantasy-relevant player.

We’ll know more about his Week 8 status when the Detroit Lions release their initial injury report on Wednesday.

Conner (ribs) was a “game-time decision” for the Cardinals’ Thursday night game against the Saints this week, but he was unable to play. With Arizona having a bye week after playing this past Thursday, he could return to the field in Week 8 against Minnesota.

Read also: NFL Power Rankings Week 8: The Arizona Cardinals are in first place, while the Detroit Lions are in last place

Conner did not practice last week in preparation for their TNF matchup, but as a six-year veteran, his practice status has no bearing on his playing status. Even if he is able to play this Sunday, the emergence of backup Eno Benjamin limits his upside to that of a high-end flex. Conner, who led all RBs with 18 touchdowns last season, has only scored once in five games this season. If Conner is unable to play, Benjamin is firmly established as an RB2.