Ezekiel Elliott (born July 22, 1995) is a running back for the Dallas Cowboys in the National Football League (NFL). In 2015, he was named second-team All-America at Ohio State University. The Cowboys selected Elliott fourth overall in the 2016 NFL Draft.

What exactly is Ezekiel Elliot’s injury? 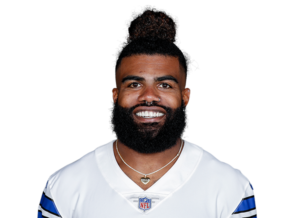 Injury Status: Friday’s practice will be limited. Week 11 at Minnesota is in doubt.

UPĐATE 2: According to Jon Machota of The Athletic, Elliott (knee) practiced in a limited capacity on Thursday.

Elliott was a limited participant in every practice last week and did not play in the Packers’ eventual loss.

Coach Mike McCarthy stated on Wednesday that the upcoming Thanksgiving game and the short week will have no bearing on Elliott’s active/inactive status this Sunday at Minnesota, telling reporters that Elliott will play if he is ready.

Elliott had a career-low 13.9 carries per game but finished in the top ten among backs in carries, rushing yards, rushing touchdowns, carries inside the 5, routes, targets, and receptions. Elliott has finished each of his six NFL seasons as a top-12 fantasy back, but he has finished outside the top 15 in PPG the last two years.