On Wednesday evening, the Cleveland Cavaliers will face the Milwaukee Bucks in Wisconsin. 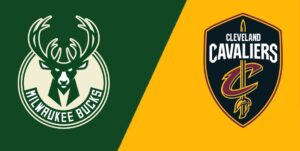 The Cavs went on an eight-game winning streak after losing their first game of the season. They are currently on a four-game losing streak, giving them an 8-5 record in 13 games.

They are the fourth seed in the Eastern Conference and have a 4-4 record away from Ohio.

Darius Garland is expected to face the Bucks.

Donovan Mitchell (ankle) is a game-time decision against the Bucks on Wednesday.

Mitchell returned to practice on Tuesday, but his game-time designation indicates that his ankle isn’t completely healed. Before making a final decision on his status, he may need to run some warmups on Wednesday.

Jarrett Allen (ankle) will miss Wednesday’s game against the Bucks.

The Bucks are one of the best teams in the NBA to start the 2022-23 season, with a 10-3 record in their first 13 games. They have, however, lost two consecutive games.

Khris Middleton (wrist) will miss Wednesday’s game against the Cavaliers. Middleton did not practice on Tuesday, so his debut will have to wait a little longer.

Giannis Antetokounmpo will most likely play against the Cavaliers.

Giannis Antetokounmpo’s performance was still productive, and his struggles were most likely due to rust; he missed the previous two games for Milwaukee, giving him a full week off before Monday.

Jrue Holiday (ankle) is questionable for Wednesday’s game against the Cleveland Cavaliers.

Holiday could miss his fourth consecutive game on Wednesday due to a right ankle sprain. The veteran guard practiced on Tuesday, so if he is unable to play against Cleveland, he will almost certainly play against the 76ers on Friday.

Pat Connaughton (calf) is listed as questionable for Wednesday’s game against the Cavs.

Wesley Matthews (hamstring) did not practice on Tuesday and will miss the Cavaliers’ game on Wednesday.

According to Eric Nehm of The Athletic, A.J. Green (nose) practiced on Tuesday, but his status for Wednesday’s game against Cleveland is unknown.