According to Hamlin’s uncle, doctors flipped him on his stomach to relieve pressure on his lungs at UC Medical Center, Damar Hamlin is still sedated and being ventilated. 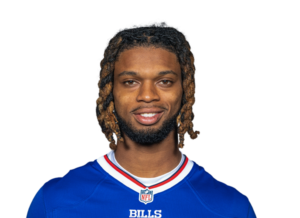 UPDATE (Jan. 8): Damar Hamlin is breathing on his own and speaking to family, physicians and teammates.

UPDATE (Jan. 6): Doctors said Thursday that Damar Hamlin is awake in a Cincinnati hospital, neurologically sound, and moving his hands and feet.

Hamlin’s uncle, Dorrian Glen, stated: “He’s still here, he’s healing right now. Like I said, they sedated him just to try to give him a better chance to continue to heal better. Just taking it day by day, and it seems like he’s trending upwards in a positive way, and thank God for that.”

The cardiac arrest of Hamlin was unexpected, according to Glen. He stated that Hamlin was “as healthy as an ox” and had no prior heart issues that he was aware of. He also revealed that Hamlin died and had to be resuscitated twice, once on the field and once at the hospital.

“I just want to express my gratitude to the medical staff that was on hand. If not for them, my nephew probably wouldn’t be here, and I mean that from the bottom of my heart. We thank them.”

Hamlin’s mother and father have always been by his side. Glen expressed their heartbreak: “This is just devastating.”

Related: The Bills have issued a statement regarding Damar Hamlin’s injury

“WHO Dey Nation is with you Bills Mafia.”

These are just some of the signs and fans filling up the sidewalk here at the UC Medical Center @FOX19 @Bengals @BuffaloBills pic.twitter.com/YCZv92ns9T

It’s also been a difficult day for those who went to a football game on Monday night and left with the kind of wound that only public trauma can leave.

An impromptu prayer circle formed outside UC Medical Center not long after Hamlin arrived by ambulance. A church service was held for him less than a mile away from his hospital bed on Tuesday at noon.

More:  Damar Hamlin was ‘seriously’ injured, the Bills will return to Buffalo

Powerful images of the prayer circle for Damar Hamlin outside UC Medical Center. Blue and orange colors flicker together in the candlelight. There's shock, heartbreak and an undeniable sense of trauma. Everyone is hoping and praying that good news will come in the morning. pic.twitter.com/HRyXsaHQo1

Glen expressed his appreciation to the people of Cincinnati for their help.

“Everyone’s been so nice out here,” he said. “Everyone I’ve gone up to has asked, ‘Do you need anything?’ Giving me prayers and wishes, and it really means a lot to our family dealing with this, because no one expected this to happen, but knowing you’ve got that circle of support to help you get through it, it helps a lot.”

Glen also encouraged those who were praying for Hamlin to keep doing so.

“Because, I really believe those are making a difference for him to have the full recovery we’re all hoping and praying for and expecting.”