The Celtics and Nuggets will begin the 2023 season with a New Year’s Day matchup on Sunday night. The Celtics have won four straight games. While the Nuggets have won six of their last seven games. 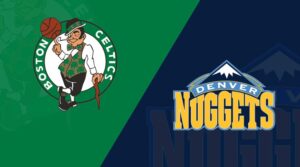 The Nuggets had a three-game losing streak at the start of December, but they have been nearly flawless since then. The Nuggets have won nine of their last eleven games, going 9-2 on the road against the Lakers and Kings.

They have won seven of their last eight games entering this game, including a 124-119 victory over Miami on Friday. Jamal Murray scored seven of his 14 points in the game’s final two minutes, and Nikola Jokic recorded his eighth triple-double of the season. The two-time MVP shot 8 of 15 from the field, marking his team-record 26th straight game shooting 50% or better.

The reigning MVP is now averaging a triple-double in the month of December (29.2 points, 12.3 rebounds, 10.1 assists) and has dished out 10 or more assists in six of his last seven contests.

The Boston Celtics have been one of the hottest teams in the NBA this season, racing out to a 21-5 record in their first 26 games. The Celtics went on to lose five of their next six games, three of which came at home in the middle of December. Since then, they’ve won four straight games, defeating Minnesota, Milwaukee, Houston, and the LAClippers.

Tatum carried the Celtics to victory in this game despite the fact that he needed 26 shots to score 29 points, but this goes to show just how good he’s been this season.

He’s averaging 30.1 points while making 45.2 percent of his field-goal attempts in December and has been a top fantasy performer regardless of format so far.