What do the Bills want in a running back trade? Cam Akers ? Why not just keep Zack Moss then? 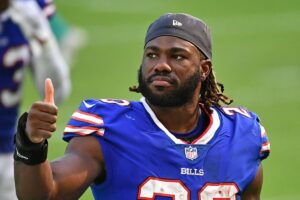 The Buffalo Bills considered trading for All-Pro running back Christian McCaffrey before the Carolina Panthers traded him to the San Francisco 49ers, which is reason enough to believe that the Super Bowl contender may be a bye at the position as the NFL trade deadline approaches on Nov. 1.

And, according to The Athletic, they could also be a seller.

The “seller” concept is ineffective, and the outlet admits as much. Running back Zack Moss was traded for a late-round draft pick? Moss was a healthy scratch in last week’s win over Kansas City, and rookie running back James Cook, along with starter Devin Singletary, appear to be the future.

But what would be the point of trading Moss for a third-round pick in 2020?

More intriguing is an examination of what the Bills might think of as a buyer, owing to the McCaffrey (albeit limited due to the high price) interest.

With a thought comes The Draft Network, who believes the Bills could make a trade for Los Angeles Rams running back Cam Akers. He’s fallen out of favor with the Super Bowl champions, but he’s also been extremely underutilized this season. And in the end, he’d be nothing more than a third-string back in Buffalo.

And if the Bills want that, why not just keep Moss?