The New Orleans Pelicans can finish a three-game road trip with a win, but Zion Williamson must outplay LeBron James.

Final Injury update for Laker vs Pelicans: Zion Williamson is in the starting lineup 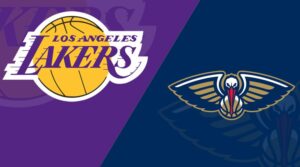 There is no doubt that there is a growing rivalry between fans and franchises. In comparison to the legendary Lakers, the Pelicans are newcomers. However, the trade of Anthony Davis for Ingram, Josh Hart, Lonzo Ball, and draft picks tied the futures of these franchises together for the majority of the decade.

When it comes to steals, turnovers, fouls, and free throws, the story of the tape is only close. The Lakers are better at grabbing rebounds (6th vs. 15th), but the Pelicans share the ball at a much higher rate, ranking 7th in assists compared to the Lakers’ 22nd.

A victory at the Crypto.com Arena would keep the Lakers near the bottom of the standings and on top of the lottery.

With the Pelicans vying for the top spot in the West and a 2023 NBA Draft pick swap, this sassy rivalry is only getting spicier.

The Pelicans have been competitive in every game, regardless of who plays, and this game against the Lakers should be no exception. Willie Green is quickly becoming one of the NBA’s most respected head coaches, and for good reason. He has the full support of a talented and deep locker room.

According to the eye test, New Orleans has been borderline dominant at times, and the advanced stats back it up. Despite the fact that the team has yet to find its sixth gear, the Pelicans rank fourth in offensive rating (117.5), 14th in defensive rating (111.1), 5th in net rating (+6.4), have the second-most offensive rebounds (34.9%), and the most total rebounds (53.1).

Zion Williamson is back in action after a big win over the Los Angeles Clippers, and he’s ready to take on LeBron James in this early-season matchup.

Except for Ingram, it appears that everyone will be available to play on Wednesday night. E.J. Liddell and Kira Lewis Jr. are also absent.

The Laker’s injury has also been reported:

James (foot) is probable for Wednesday’s game against the Pelicans.

Toscano-Anderson (ankle) is probable for Wednesday’s game against the Pelicans, Ryan Ward of LakersNation.com reports.

ANthony Davis (back) is questionable.