The Philadelphia 76ers will look to win their third consecutive game on Monday against the Washington Wizards, capping off a four-game road trip. Following the 1-4 start, they appear to have gotten back on track. 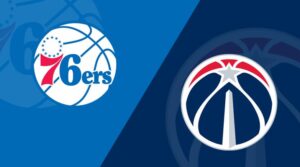 They may be without their superstar big man as they prepare for the Wizards and their matchup with Kristaps Porzingis and Bradley Beal.

Due to a non-COVID illness, Joel Embiid (Day-To-Day) is listed as questionable on the injury report. This comes after he scored 25 points and hit the game-winning triple against the Chicago Bulls on Saturday. He also missed a game on Friday while recovering from a right knee injury.

After suffering a bone bruise against the Washington Wizards in March, Joel Embiid missed 10 consecutive games, but the Philadelphia 76ers star expected to be out much longer.

Embiid, the highest-scoring center since Shaquille O’Neal won the MVP in 1999-2000 (29.7 points per game), would have had a strong case for his first MVP award if he hadn’t missed that 10-game stretch.

If Embiid is unable to play, the Sixers will struggle to win against the Wizards. However, in the one game without the big man, Philadelphia relied on Tyrese Maxey to get the job done, and he delivered in a big way, allowing them to build on their success.

Corey Kispert (OUT) has been ruled out indefinitely with a Grade 2 hamstring strain.