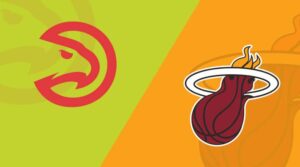 On Sunday, the Miami Heat begin a four-game road trip. The team has recovered from a string of poor performances. They had lost four straight matches before responding with two wins.

Tyler Herro (ankle) is listed as questionable for Sunday’s game against the Hawks.

Herro has played in two games since returning from an eight-game absence. He’s struggled with his shooting, going 10-for-33 from the field, but he has 13 assists. He joins five other Heat players on the list of suspects.

Duncan Robinson (ankle) is questionable for Sunday’s game against the Hawks, according to Anthony Chiang of the Miami Herald.

Robinson has now missed three games in a row. On the injury report for Sunday, he joins five other Heat players.

The Atlanta Hawks have lost three of their last four games coming into this game. They were thrashed on the road in Cleveland, defeated the Kings, and were large seven-point favorites against the Rockets in a surprise 128-122 loss on Friday.

Bogdan Bogdanovic (knee) is still not participating in full practice, according to Hawks coach Nate McMillan, and there is no timetable for his return.

Meanwhile, Capela (dental pain) is questionable for Sunday’s game against the Heat.