On Friday, the Brooklyn Nets will travel to Toronto to face the Raptors. This season, these two teams have already met three times, with the Nets winning the most recent meeting 114-105. 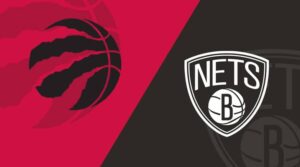 The Brooklyn Nets defeated the Washington Wizards 112-100 last night. They were strong on defense, and if they want to challenge the Raptors on the road, they will need to keep up the pressure.

Kyrie Irving has regained his focus on the court despite all the turmoil he’s been involved in off it.

Due to right hamstring tightness, Seth Curry is questionable for Friday’s game against the Raptors, according to Christian Arnold of the Associated Press.

Curry was out of Saturday’s game against the Pacers due to left ankle injury management, but he now has a hamstring issue. If he misses Friday’s game, Edmond Sumner, Cam Thomas, and other guards could see increased playing time.

The Toronto Raptors come into this game after falling to the Sacramento Kings 124-123. The Raptors struggled defensively, allowing the Kings to shoot 48.4% from the field. They’ll have to contest more shots if they want to give the Nets a run for their money at home.

Pascal Siakam is expected to keep his starting spot on Friday.

Pascal Siakam went on a tear and scored 20-plus points in six straight games between Nov. 30 and Dec. 9, but he’s failed to reach that threshold in each of his last two games. That should be nothing more than a hiccup for the star forward, who is still the Raptors’ best player this season. In seven December games, Siakam has averaged 25.4 points, 7.4 rebounds, and 6.9 assists.

Otto Porter, who hasn’t played since November 14 due to a toe injury, will be out for at least another month, according to Sportsnet.ca’s Michael Grange.

Porter saw a specialist recently and will be evaluated again in about a month. The veteran forward has only appeared in eight games this season, so his extended absence should have little impact on Toronto’s rotation, though Juancho Hernangomez (ankle) should get a solid reserve role while Porter is out.